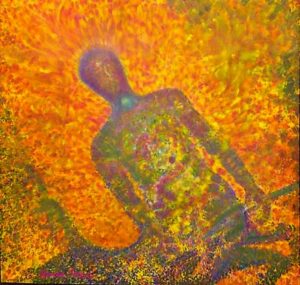 The New Moon in Aries on Monday April 16 is conjunct electrifying Uranus while Mercury is direct again. This New Moon is significant for new beginnings as it initiates a cycle of new possibilities. Uranus conjunct the New Moon can give us that extra courage to make a leap ahead, starting or changing something which we have been contemplating but haven’t dared to follow through with yet. Uranus functions as the Cosmic Awakener and requires freedom and authenticity. We might be ready now for a journey into the unknown, whatever that might mean…..  We can open up to fresh information, reach new levels of meaning and can make  new connections, especially if we have done our soul-searching and reviewing  work during the Mercury retrograde phase.

On April 17, Chiron, the mystic  wounded healer and teacher, enters the sign Aries. Chiron’s 8-year transit through this sign will mark changes in the healing paradigm. Themes concerning the right way of dealing with anger as a core energy and the expression of our life force have to be addressed during the coming years. The Aries quest is to have courage, protect the weak and fight for a higher cause. The  shadow side is fearful, aggressive and egotistic. Chiron in Aries signifies the need to heal the ‘wounded masculine’ in men and women. More often than not, rage and the drive for hurting others is anchored in feelings of inferiority, old hurts and  prior experiences of humiliation and shame. Chiron’s message is to rise above these old  pains through acceptance, helping others to heal  and thus finding  new meaning and understanding.

Mars in Capricorn forms a conjunction with the rebellious Black Moon Lilith, exact April 19, and then with Pluto, Lord of the Underworld, during April 24 – 29. We can feel empowered to tackle authority issues, or take  on a project that requires a lot of dynamism and vigour. In any case, we need to deal with these energies carefully by channelling them into a worthwhile cause. On an symbolic level, Mars, the God of War meets with Pluto/Hades, the God of the Underworld. Shadow material can easily erupt. The higher road of Pluto is the transformation and purification of old debris into fertile soil for planting a new seed; the lower road is giving in to the urge for revenge and destruction. Ultimately, Pluto’s quest is the fight between the ego and the soul, teaching us lessons concerning the right use of will. Pluto functions also as the higher octave of Mars, which is the archetype of the ‘sacred masculine’ and the ruler of Aries. So, Chiron, Aries, Mars and Pluto play a vital role over the next few weeks!