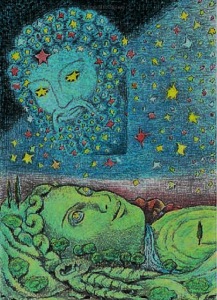 This new Moon in Taurus marks the beginning of a new era as Uranus, the God of the sky enters the most earthy sign of the Zodiac  just a few hours later. Uranus will remain in Taurus until 2025/26 except during 6 November 2018 – 6 March 2019, when the ‘Cosmic Awakener and Liberator’ returns into Aries for the last time.

The transition of an outer planet, such as Uranus,  into a new sign marks a highly sensitive and powerful moment in history. We can expect the unexpected! Uranus correlates with ‘the higher mind’ and brings the necessary higher frequency energy for altering dynamics at core levels and reshaping matter. Uranus and Gaia  are the mythic primordial parents of life. The entry of Uranus in Taurus is an invitation to become co-creators in the making of a new world. Indeed, our own vibration adds to the overall atmosphere! Uranus in Taurus teaches us the power of spiritual – mental energies, while the layers of the material world are becoming more transparent. Nevertheless, we need to stay grounded in our bodies (Taurus), while feeling embedded and at home in the larger cosmos (Uranus). Uranus is the essential force of creation. In myth, he poured gentle rain (waters of life) upon Gaia, so that she would flourish. What a perfect New Moon for planting a seed for the world!

We have an amazing addition to the current global shift of 2018 as activator Mars zooms into the sign of revolution & change…Aquarius…also on May 16th! Uranus is the modern ruler of Aquarius. This is particularly significant as he will spend six months in Aquarius until November due to his retrograde phase this year (June 26 – August 27). Mars is usually a six-week transit through a sign, but the action planet will be in Aquarius until mid-November. Mars in Aquarius rules: politics, social trends, grass root movements, weird  weather, global warming issues, science & technology, independence and emancipation initiatives. Anything goes when Mars journeys through Aquarius, the sudden and the unexpected, especially so when it is in dynamic tension to Uranus. We will see a lot of opportunities suddenly emerging, but there is also an element of risk involved. We are invited to think out of the box and imagine the impossible.

Uranus will shake up anything Taurean, such as our value systems, currencies, economics as well as environmental conditions. If you would like to explore what Uranus in Taurus might mean for your own life, come and join me for a 1-day workshop this Saturday at the Lillfield Community Centre:
“A Change in Frequency: Uranus in Taurus & Chiron in Aries”
May 19, 10 am – 4 pm, Lillifield Community Centre,

Have a great New Moon,